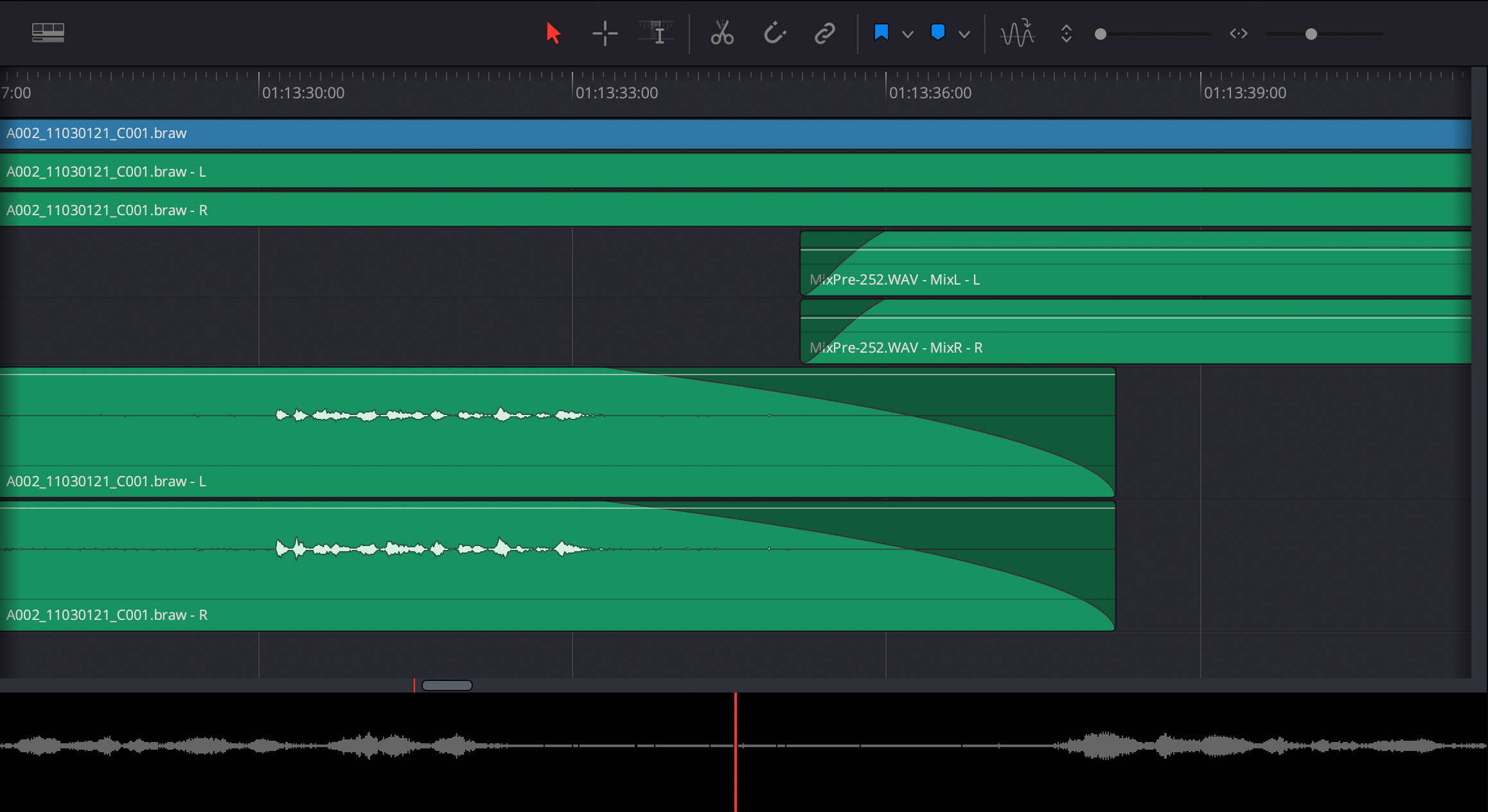 This tutorial is written for DaVinci Resolve Studio 17. Adding audio fades are extremely easy and highly flexible in DaVinci Fairlight and Resolve, but not 100% intuitive. So allow us to clear the flog! With an open project, click over to the DaVinci Fairlight edit page (the music notes icon on the bottom of Resolve).

If you right-click any edit point on your audio track, you’ll be presented with various cross fade options. Just pick one as you can adjust the exact frame count easily after adding. If your edit point has adjacent audio, it will add a cross fade. If the audio clip is isolated on another track, it will add the fade to the beginning (or end) depending on where you right-clicked on the clip.

Alternatively, and even easier, you can simply click the white indicator on the top left or right of any audio clip and drag it over to introduce a fade. This works for both audio and video tracks.

Now you can easily adjust the length and style of your audio fade using the white marker on the top of your track. Simply click and drag to shorten or extend the audio fade. You can also use the center dot on the fade to adjust the style of the audio fade.

You can also work with fades on the edit page. Simply right-click or drag the white indicator as in Fairlight. You can also add them via the Effects palette, although this takes longer. First make sure the effects palette is open by clicking the Effects icon on the top right of DaVinci Resolve. Next, in the lower right effects palette, click on Toolbox. Here you can access various cross fades. Simply drag them onto your timeline in the desired spot.

The fades added via the Edit or Fairlight pages are accessible in each area. Personally, I like to keep all of my audio editing in Fairlight so everything is consistent. You also cannot control the type of fade on the edit page as you can within Fairlight.

Another powerful method of manipulating audio is via audio keyframes. You might hear people call it “rubberbanding.” If you hear that term, they’re talking about adding keyframes to a clip of audio in the timeline. To add an audio keyframe in DaVinci Resolve or Fairlight simply option + click (alt + click in Windows) on the gain line of your audio clip. Be careful to click on the gain line otherwise it will not give you the key frame.

You can also use the Inspector to add a key frame from the DaVinci Resolve edit page, but the keyboard method is much faster.

And there you have it! Again, crazy simple but with Resolve Studio 17 freshly installed and everything at defaults, not always intuitive. If you’d like to learn more simply check out other articles or visit the Write & Direct YouTube channel. For comprehensive training on writing and directing films, enroll in Write & Direct today! As incredible as film school can be, it may not be the silver bullet you think it is.

If you look at successful directors, the answer to the film school question is all over the map. Quentin Tarantino is a high school drop out. Steven Spielberg was rejected three times from USC. Chris Nolan attended University College London, but studied English, not film. James Cameron dropped out of college. M. Night Shyamalan graduated from NYU’s Tisch School of the Arts.

These are wildly successful filmmakers, with drastically different degrees of education.

So if we stop right there and ask the question, “Is film school worth the money?” we’d be tempted to say, “not really.” Right? I mean M. Night is the only one who actually went to a legit film school before starting his career.

But here’s the thing: Regardless of whether film school is worth the money, there’s one fact that is indisputable. There’s really no getting around it: You must learn the craft.

Take music for example. Sure there are prodigies born with the ability to master an instrument at the age of 7. But that’s not the norm. Most musicians have a deep knowledge of music theory along with thousands of hours of practice before they find success.

Filmmaking is no different.

An aspiring director must not only understand the craft, but invest thousands of hours in mastering the craft. And the key to this is to obtain the right education with the least amount of time and money spent. Why? Because practicing the craft will cost much more than film school ever will.

The key is to obtain the right education with the least amount of time and money spent.

Too many aspiring filmmakers nuke tens of thousands of dollars on school only to be hit with a stark realization after graduation: Nobody is going to hire them.

The only writers and directors who get hired are the ones with experience. So as a film school graduate, how do you gain experience as a writer and director? By writing and directing movies. But how do you pay rent, pay off school loans and fund a production?

And this is the entire problem with film school.

Is film school worth the money? Well, that depends on how much money you have in the bank. Because once you graduate, you have to start making movies immediately. And somebody has to foot the bill.

Another massive challenge for aspiring writers and directors is a dependence on crew. What happens if on day three of production your sound guy doesn’t show because someone can pay him more? Or the camera operator flakes? Or the one with the lights is sick?

For many filmmakers, their production stops right there.

It’s 2022. If you want to write and direct movies, you have to know it all. You can’t afford not to. You need to be able to get movies made, even if you have to be the sound mixer. Or the DP. Production designer, location scout, casting director, editor and sound designer.

Because unless you can pay all of these people, you can’t rely on them.

This is what Write & Direct is all about.

You will gain the required knowledge of the craft for drastically less time and money spent on film school.

How? Because I’ve done it the hard way. $60K in school loans only to start as a production assistant on studio films, barely paying rent. Then I jumped into the trenches of independent filmmaking where I had to work full time as a web designer because indie film doesn’t pay.

Over the years I’ve learned how to do it all, and can help you side step some of the landmines that claim the passion and careers of so many aspiring filmmakers.

This isn’t training on how to shoot weddings or real estate commercials. This will teach you how to become a narrative filmmaker who understands the craft, and rapidly jumps into making movies. And the training is just the beginning!

Sign up today and change your future. Write & Direct is backed by a 100% money back guarantee.

I hope to see you on the other side!

If you’re like me, you’ve spent a lot of time working in various non linear editing systems. They each have their own way of doing things. The first thing I do on a new NLE is familiarize myself with how to do the common tasks I need to do in order to edit quickly. Few things are used more than inserting media into the timeline!

The fastest way to place a clip in the timeline is to visit the Cut Page and drag the clip from a bin down to the timeline. However this is impractical most of the time.

Let’s look at some of the most common methods you’ll use from the Edit Page:

How to Smart Insert Footage

When you have a working timeline full of existing clips, sound FX and other items, you can’t just drags clips in. A common way to get a new clip into the timeline is to insert it. DaVinci Resolve calls this a ‘smart insert’ as it will push everything down the timeline to make room for the new clip.

First, make sure the right video and audio tracks on your timeline are active (red box). Next mark an in and out in the source clip (I and O). Then position your playhead where you want the clip inserted and hit F9.

And btw, as much as I appreciate Resolve’s default mappings, I prefer my own. You can fully customize the Resolve keyboard.

How to Overwrite Footage

The replace footage feature is similar to overwrite, but used to replace only a certain area on the timeline. If you select an in on your source clip and then position the playhead over a section and hit F11, DaVinci Resolve will overwrite timeline footage either between to edit points on the timeline, or between a marked in and out.

Another option similar to replace is Fit to Fill. If you have two edit marks and you’re inserting source material that is shorter than the desired section on the timeline, you can use Fit to Fill to fill the entire space by slowing down the source clip. Obviously this only works in certain situations. Use Shift + F11 to insert source material as Fit to Fill.

Once you’ve inserted the source material if you right-click on the section in the timeline and choose Retime Controls you can see detailed information on how much the clip was slowed down, etc.

The ripple overwrite tool is like combining normal overwrite with ripple delete. It overwrites existing content, but if the clip is longer or shorter, the timeline is either extended or the remaining gap is removed. Use Shift + F10 on the keyboard for Resolve’s ripple overwrite.

These are not the only ways to add media to the timeline in DaVinci Resolve, but these are my favorites! And I love that you can map all of them to shortcut keys on the keyboard.

Coming from a decade of using Avid Media Composer, I’m shocked at the tools available in DaVinci Resolve at such an affordable price point. I will always love Avid, but Resolve is making it possible for new filmmakers to tell their stories without the price tag of other solutions.